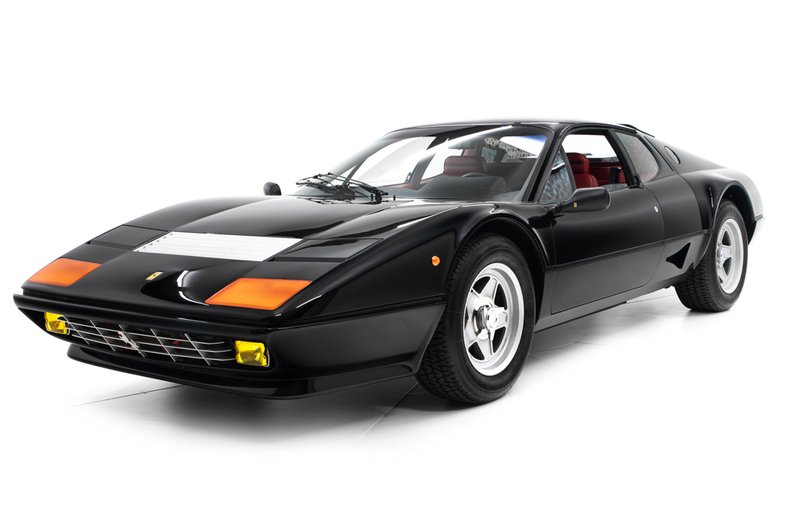 When the Ferrari Berlinetta Boxer was introduced in 1973, it received as much attention as the debut of a new Supercar. Ferrari's newest addition to its famed Berlinetta series looked nothing like the models before it. The Berlinetta Boxer featured a flat 12 cylinder engine mounted in a mid-position rather than the traditional front mounted V12.

The Pininfarina designed and built alloy body was exotic but not over the edge. The front and rear opening clamshells are so mesmerizing that you don't want to close them. Under the front clamshell is just a storage area, but under the rear, is a massive 12 cylinder engine inspired by the famous flat 12s that powered Ferrari's 312 Formula 1 and prototype spots racers. The package was far more modern than any previous Ferrari and opened a new era of Ferrari road cars.

Boxers were built from 1974 through 1984. Our car is a highly desirable 1983 BBi model, the most sophisticated and user friendly of the series. It features a 5-liter engine with Bosch fuel injection with an electronic ignition system. The top speed is 179 mph.

This car was imported as a new car by legendary Boxer importer, B.J. Lyons. It was properly federalized and sold to a Doctor in Chattanooga, TN. It subsequently passed through the garages of several well know Ferrari enthusiasts including the previous owner/restorer of the ex-Steve McQueen Ferrari Lusso.

Along the way, the Ferrari was sparsely used and excellently maintained. It has been kept up and refurbished to show condition. It has been converted back to European spec bumpers, sidelights, knock-offs, and exhaust. It is complete with original books with pouch, tools, jack kit, and a priceless original Pioneer stereo and equalizer.

This is a dramatic car that is one of the best looking Boxers that you'll ever see. With the equivalent of 15,300 miles, it still looks crisp and drives perfect. The clutch is good, the dash is good and the paint sparkles. We've priced it to sell, so get here fast.