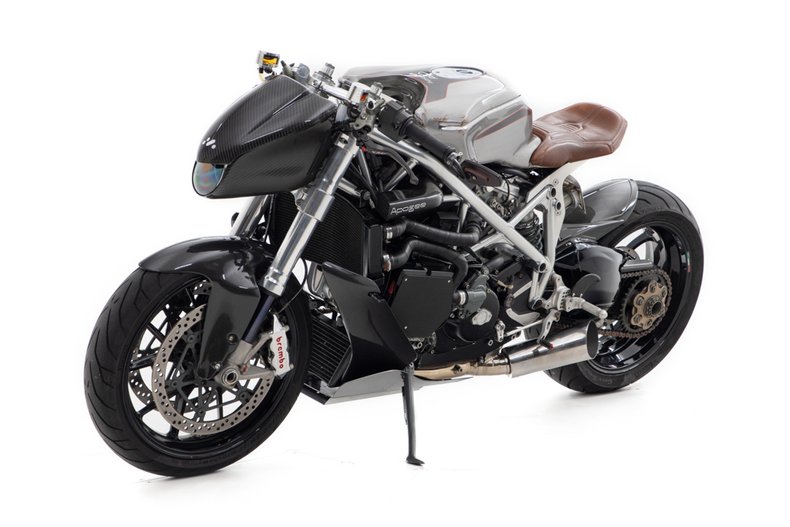 Apogee Motorworks' genius, Gustavo Penna decided to base his incredible Raffale Superbike on the Ducati 1098R because it was “the last great analog Ducati”.

The Raffale is a total evolution of Penna's Francesca superbike. It features a chromolium frame, dry clutch, and pulley controlled throttle, and “just the right amount of computer interference” The Italian Desmodronic beast has the craziest low torque of any Ducati super bike.

This Apogee Moto's gas tank is a particular point of Penna's pride. The custom built tank has three finishes done by the best painter in the industry. It is mounted in a state of the art, aircraft aluminum and titanium subframe. The tank is removed with the twist of one thumb screw. Also scratch built is a carbon fiber airbox that facilitates precision tuning of the stacks and injectors. A Penna designed carbon air intakes deliver the right amount of air into the carbon air box.

The ultra-high polished custom headers are scratch built as are the titanium scotch brite filled mufflers. The exhaust is tuned to a state of the art mapping to make the bike scream at all ranges of its massive 188 hp.

The exhaust system is flanked by aviation inspired lower aero-work. The entire belly pan and side wings are set up to create a venturi that speeds up the air three and a half times in the lower extremities. That helps evacuate the exhaust heat that builds up near the back of the bike at lower speeds.

The saddle is covered with special ultra-soft leather imported from Japan. The saddle holds the rider amazingly well during acceleration and braking yet allows them to slide left and right. That translates to more control when you toss the bike around the twisties.

The Nose Monocoque was inspired by the chiseled cheekbones of Penna's Russian sweetheart. The design is made in perfect proportion to the rider's helmet and riding position reducing helmet side to side buffeting. The Laser Xenon lighting unit comes from a BMW I8.

The bike rides on Marchessini forged rims treated with the same ceramic finishes used on the frame, engines, swing arms and various parts. The result is something pulled straight out of area 51.

The 309 pounds and 188 hp bike has the power of a 1200cc Italian twin but the weight of a 500cc racer. The bike is part of an exclusive run of only 9 sisters. It is ready for a very lucky rider who demands nothing less than the very best.