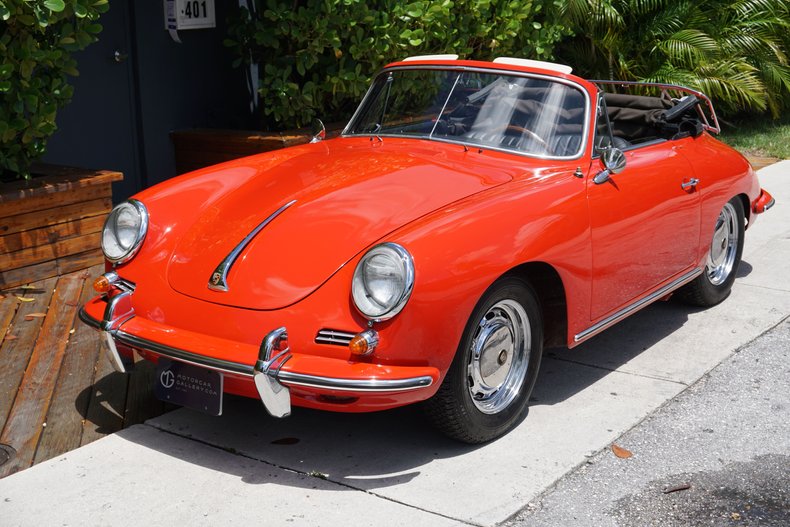 A very late example that has been with the same owner for a couple decades.

Porsche's Type 356 is acknowledged to be one of the world's great sports cars. Over a 15-year production run, the handsome and durable 356 evolved from a 46bhp 4-cylinder streamlined coupe to an autobahn burning 130bhp two-liter Carrera. The line included coupes, luxurious cabriolets, speedsters, and roadsters. Over 76,000 examples were built by the time production ceased in 1965.

The 356 made its final transformation with the Type 6 body in 1963. Designated 356C, it had a new ZF steering gear and compensating springs at the rear. Four-wheel disc brakes were added, and a 12-volt electrical system was available. Two 1,600cc engines were offered, the 75DIN horsepower 'C” version and the higher compression and counterweighted crankshaft 95DIN horsepower “SC” version.

Our 356SC Cabriolet was completed at Porsche's Zuffenhausen Works. It is a late production example built as Porsche was transitioning to their new 911 model. This car benefited from all the many upgrades Porsche implemented during the 356-production run.

If you have followed our inventory for a while, you may have noticed several cars with Venezuelan origin. We had a good friend, Jose Harth who lived there and who had put together an impressive collection of German masterpieces. Count 300 SL Gullwing, 300 SL Roadster, several other great 300 series Mercedes, a BMW 507 or two, a couple Ferraris, and this Porsches 356SC among the many cars Harth collected. As the Venezuelan economy collapsed, most of the cars were sold off, but Harth claimed he would never sell his beloved late-series SC Cabriolet. The Porsche was sent to Harth's Miami condo to use on his Miami visits. Unfortunately, his health did not cooperate, and he died before he had a chance to use the car.

We are honored to be selling our friend's Porsche for his estate. It presents nicely with lovely patinaed paint and undamaged original metalwork. The interior is very nice with seats reupholstered in leather, Nardi wood-rimmed steering wheel, Blaupunkt AM/FM/Longwave radio, and period correct Coco mats. The car runs on chrome Porsche wheels.

Few cars have the fun factor of a 356 Porsche. Add an S engine, Cabriolet body, in a C version, and it doesn't get any better. Try ours out and see what you are missing.