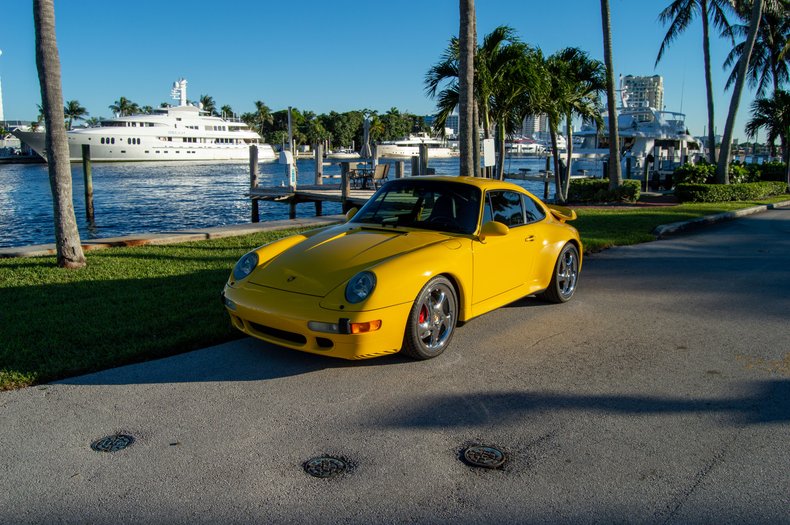 When you drive a performance automobile there are many sensations. Nearly all your senses become engaged. One word that brings each of the feelings together is Visceral. Google definition is:
”relating to deep inward feelings rather than to the intellect” Driving the last version of the Air-Cooled Turbos is a very refined feeling that takes over the intellect and draws on emotion. It is well known that Porschfilles feel that the 911 must be Air-Cooled to be the real spirit that the 911 invokes. To drive one is to know what this all means. The Twin Turbos invoke fantastic power and with completely revamped suspension, handling becomes race-car like.

Our current “Yellow-Bird” as we affectionately call it, comes from the 2nd owner who cared for the car for 22 of the 24 years the car has been in existence. Ordered as a Paint to Sample USA version that was factory delivered, it traveled throughout Europe until it was returned to the factory in Stuttgart. It was there that the car was serviced and the original sport seats were replaced with the current standard seats. The factory then properly exported the car to the original selling dealer in California. Less than 18 months later the car was sold to the gentleman whom we purchased the car from. He called this car a “family member” for 22 years. When we examined the car, a phone call was immediately made to thank him for providing such an immaculate example. His description was spot on and he included all original parts with numerous extras including a 1/24th scale model in the original paint to order color of Ferrari Fly Yellow. Yes this car was ordered in this color. Fast forward to the year 2000. After building a great relationship with a Porsche tuner in Laguna Hills, it was decided to perform some modifications. This particular tuner was known for building meticulous Air-Cooled race cars. This car was a long term project to make a drivable 993 hot-rod. The goal was to make a sleeper with zero body modifications. Today the tasteful mods include larger Turbos, a more efficient inter-cooler and free flow exhaust. There is an electronic boost control and a factory style boost gauge. This all adds up to a fantastic performing 993 Turbo that looks spectacular and gives the driver that Visceral feeling that only an Air-Cooled Porsche can provide.