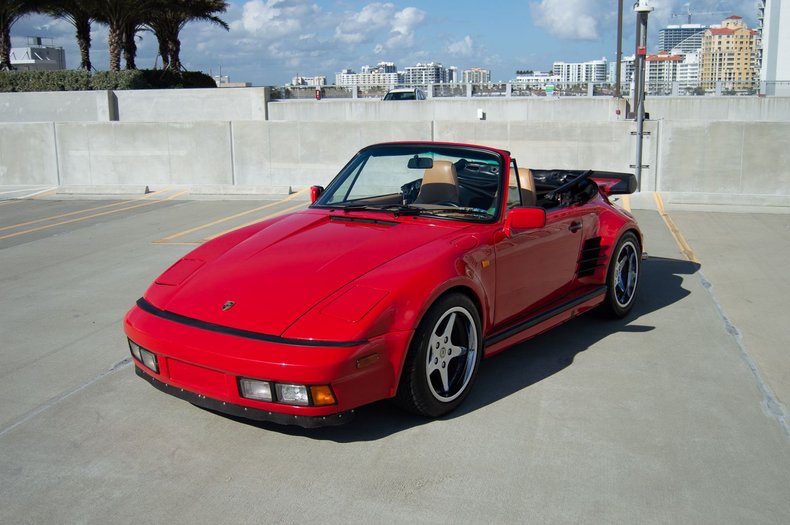 The mystery of Gemballa began in 1981 just outside of Stuttgart Germany.. Uwe Gemballa was a renowned Porsche tuner that had a magical touch transforming 911/930 Porsches into works of art. He was infamous for being one of the 1st to include cameras replacing rear-view mirrors. He also incorporated LED lights throughout some of his cars that made the show circuit. Very soon the Slant-nose look was so popular that Porsche even started offering it up as an option. Gemaballa soon began offering body kits so that 911 owners could capture the magic of Gemballa. The Avalanche and the Cyrrus were highly respected and sought-after automobiles of the 80s and 90s. Then suddenly Uwe Gemballa was discovered murdered in South Africa ensuring that the mystery of Gemballa would endure.
Our example caries on the mystery of Gemballa. Starting life as a European version of a G-50 Carrera, it was modified to Gemballa specifications at a point unknown. The wide-body is also somewhat of a mystery as it is not known the origin due to the fact that it is well known that 491s (factory non-turbo wide-body) were never built with the desirable side strakes that our car is equipped with. The complete package this car presents is the true essence of the mystery of Gemballa. It is reputed that there are only 3 normally aspirated Gemaballas. This unverified statistic again adds to the mystery.
Our example comes out of an eclectic collection in Pennsylvania. It was enjoyed at many car shows where it won numerous trophies and ribbons. It is in fantastic running order with all the operations working as Porsches do. This is terrific Top Down performance car that is ready for Summertime.