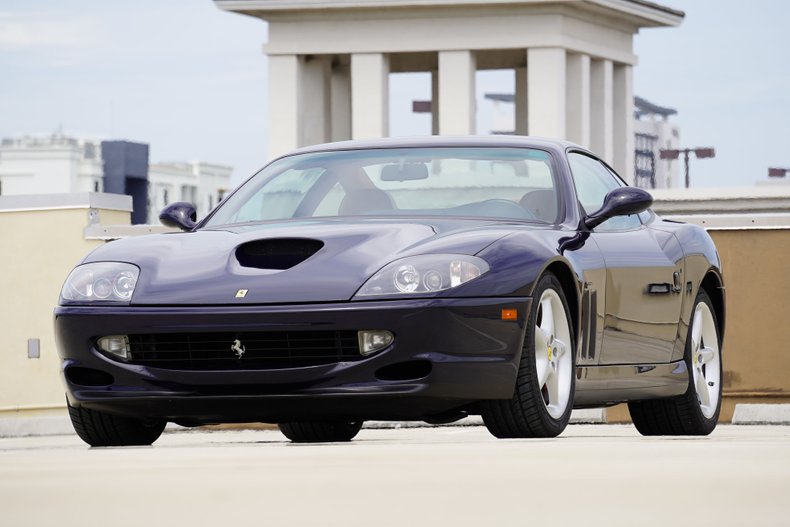 A striking car that is ready to drive, show, or both!

In 1973, Ferrari put an end to the traditional front-engine, rear drive, two-place Ferrari Gran Tourismos when the 365 GTB/4 Daytona was replaced by the Mid-Engine Berlinetta Boxer series. It wasn't until 1997 Ferrari president Luca di Montezemolo decided it was time to bring it back the GT after 24 years. The outcome was 550 Maranello.

The 550 Maranello is a descendant some of the most important cars to come out of Maranello. It's predecessors include the Ferrari 250 Tour de France, 250 SWB,, 250 GTO, 275 GTB, and the 365 GTB/4 Daytona. The 550 Maranello lives in the spirit of each of these extra-ordinary cars. It is well known that the 550 was only available with the gated shifting 6-speed gearbox. What is not so well realized is the fact that the 550 is the last GT with fully analog gauges. The Enzo Era front engine V-12 mystique lives on in each 550 Maranello.

This example is beautifully presented in Blu Pozzi exterior and Cuoio Leather interior. The condition both inside and out show a well-cared for automobile that has not been driven to or in any type of extremes. Other than a modern stereo head unit, of which the original is included, there are no cosmetic or performance modifications. Records show careful services performed and a recent new set of Pirelli tires mounted.

This is a striking car that is ready to drive, show, or both.

Trades welcome, financing options available, worldwide shipping accommodated. Contact us today for any of your classic or exotic car wants or needs.
Contact@motorcargallery.com
954-522-9900