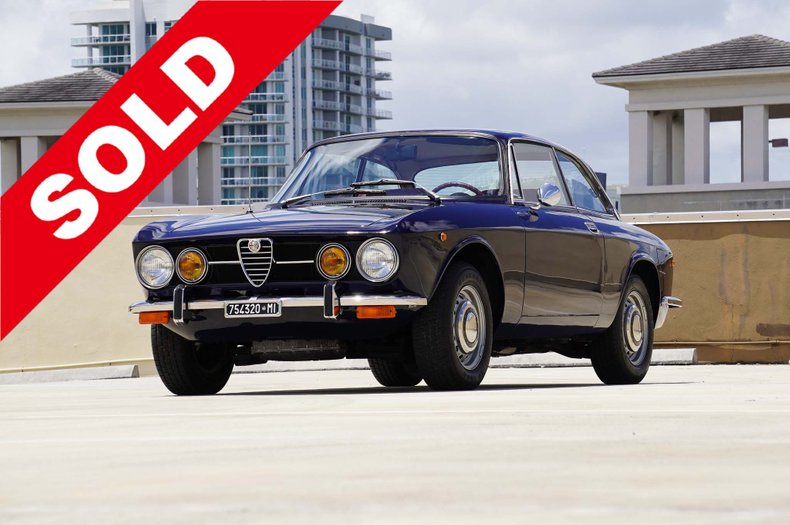 A perfect driving GTV that will turn heads anywhere it goes

Today, only the true Alfa Romeo enthusiasts know that the GT series or Tipo 105/115 was designed by Giorgetto Giugiaro in his early days at Bertone. It is well known that he went on to be one of the most prolific Automotive designers of all time. Released in 1963 as the Sprint GT, the 105 carried some design cues from an earlier Giugiaro design, the 2000 Sprint. This evolution would carry forward to become one of the most successful models ever to carry the Alfa name. This sports coupe would eventually have the letter V incorporated in the name, which would stand for Veloce; translation: Fast. Known for good performance but better known for outstanding handling. The handling capabilities are due to a very rigid body structure that is evident when put to the limit in a corner. At that point, you can see daylight under the inside rear tire. The reputation of the GTV quickly spread worldwide and was soon the winner in the under 2-liter class for many years in the racing world.

Our 1971 1750 GTV comes to us as a 1.5 owner car. Here is the story: While admiring a beautiful 2000 GTV at a car show in Northeast Ohio, the conversation evolved to a car that just might be for sale. Lucky for us, the owner of the GTV knew of a beautiful 1750. His friend/collector was just finishing up a driver ready restoration. Even luckier for us, a quick cell phone call located that same friend/collector at the same car show! Within 10 minutes we were making arrangements to go see this car. The next day we pulled up to a barn on a country road to find this stunning Blue GTV. Although initially described as “Driver Quality”, further examination proved to be much more than this description. Back to the 1.5 ownership; Our new collector/friend purchased the car as an investment/project from the original owner. Hence the .5 ownership. This hands-on collector performed a refurbishment to, what he described as: “a car to drive”. Turns out that it was such a straight car, he decided to go a bit further. After a documented engine, gearbox, suspension, and brake rebuild, the decision was made to go ahead and repaint the car. This labor of love was performed by the aforementioned collector in the also aforementioned barn! All glass and details were removed and today it looks simply fantastic with just a few minor flaws. Our new friend said that since it was such a well-cared-for car made the complete project easy. When we test drove the car in the back roads of Ohio, the temptation was to keep ongoing. What a joy selecting the gears and revving smoothly to redline. It was a glorious experience that now can be yours to enjoy.