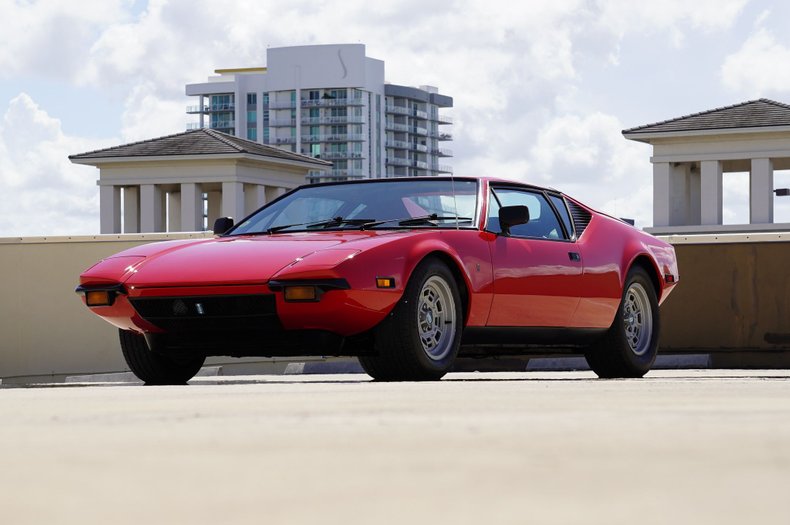 Many enthusiasts today consider the late 60s to early 80s the golden era of Italian Supercars. One of the main reasons is due to the fact that there was a personality behind the cars. Enzo Ferrari was most famous for his hands-on creations out of Maranello. Ferruccio Lamborghini was in full control of the cars coming out of Sant' Agata Bolognese and then there was the Flamboyant Argentine, Alejandro DeTomaso. Known for his exploits behind the wheel of numerous race cars, DeTomaso began building cars in the early 1960s. Starting with the pretty, little Vallelunga in 1964 then progressing to the Mangusta in 1969. Each was powered by a Ford engine placed in the middle of the car, for superior handling. Bodies were designed and built by known prolific coachbuilders. In 1970 an American named Tom Tjaarda penned the Pantera at the house of Ghia. It is thought that out of respect for the American, DeTomaso made the decision to first display the car at the 1970 New York Motor Show. It is also believed that the extremely good reception of the car lead to the decision by Ford Motor Company to market the Pantera on a large scale through the Lincoln-Mercury division. This was a very successful relationship with some 5500 cars sold.

The Pantera (Italian for Panther) was in production from 1971 to 1995 and was consistently modified to more extreme standards. In 1972 the 351 cubic inch Cleveland V-8 from Ford was modified for the American market. The compression ratio was lowered to 8.6:1 but a Cobra Jet camshaft was installed to keep performance up. Car and Driver stated that the 0 to 60 MPH test showed a time of 5.5 seconds. This was a very good performance for the time, indeed.

The Pantera being offered today is a reputed 2 owner California car. Purchased from a long-time Motorcar Gallery client, it even comes with the original California Pink Slip. This example showed up on our doorstep 3 years ago for long-term storage. During that time, any service needed was approved and it was always kept in a climate-controlled atmosphere. Fuel was drained and non-ethanol 90 octane with a mixture of some 110 race fuel was used for the longtime storage. Recent service includes a new Battery, full Fluid flush and new exhaust header gaskets.

Today many Panteras show up with numerous modifications. Some for performance, some cosmetic. This Pantera is wonderfully stock with the exception of Blacked out Chrome bumpers and replacement rearview mirrors. This makes for an extremely handsome Pantera. On top of that is the fact that it has only traveled 18,968 miles. The original spare tire and inflator bottle are included along with the original owner's manual and tool roll. Here is the chance to own a true part of Italian supercar heritage from a golden era.