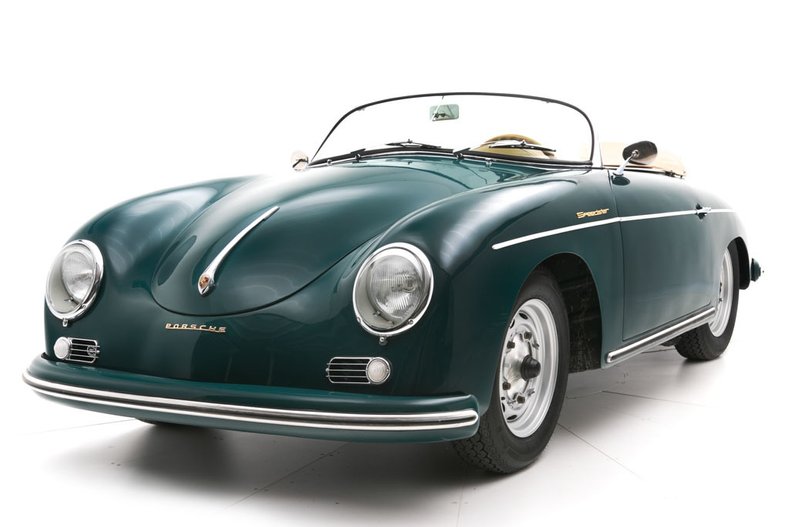 Buy This Car at The Porsche 70th Anniversary Auction October 27, 2018 at the Porsche Center in Atlanta, Georgia.

The Speedster was introduced as a lower priced option to the Porsche 356 Cabriolet. The “economy” 356 Speedster was intended to compete with the popular British sports cars of the time. It actually appealed more to enthusiasts than bargain hunters. Built with less content than the Cabriolet, the Speedster was both lighter and faster. The bucket seats, low wrap-around windshield and low waistline added to the Speedster's sporting appeal.

This Speedster came from an enthusiast owner who is quite particular that his cars are the best available. It is a February 1958 build, the last year of the Speedster production. As Speedsters improved cumulatively throughout the cars production, this is the prime model to collect. It is listed in the type 540 book and comes with a Porsche Certificate of Authenticity

The car is one of just 44 Speedsters built in Fjord Green. The tan seats are upholstered in beige leather. The interior wears new square weave carpets, new vinyl doors and dash covers, and new side curtains.

The car is 100% mechanically perfect. Everything is there and does what it is supposed to do. Every system was restored and correct for the year. The brakes were done, wheel bearings were done, transmission was done, even the heating system was restored and is fully functioning. The shift linkage was done, the fuel system was done. Every system right down to the windshield washer system with the original 1958 mechanical pump on the floor was done.

This car was raced in period and its original engine is lost to history. In the engine compartment is a very special and very rare Maestro, Harry Pellow, supplied 1965 SC engine case with 1720 piston, large oil tube, a balanced crank, and Weber carbs. The engine was “backdated” to proper 1958 appearance. A sport exhaust complements the engine work.

The body is solid and rust free. As the car was raced, on close inspection it's evident it kissed a hay bale or two. The body has not been restored to ten tenths, as the owner wanted the car to look authentic and be able to be used without hesitation.

The car drives like it just came off the showroom floor. I want it, don't you?