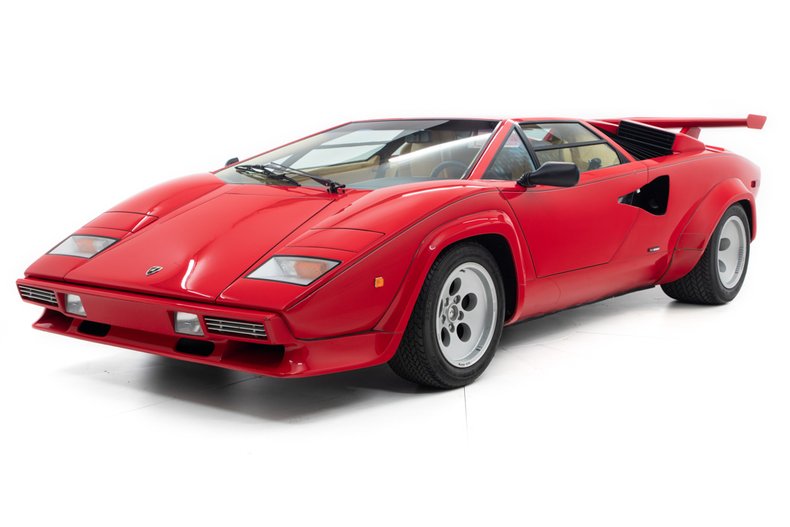 Describing Mario Andretti as a Formula 1 World Champion, NASCAR Daytona 500 winner, Le Mans 24 Hour winner, and Indianapolis 500 winner, is just scratching the surface of his amazing career. Mario is the Associated Press Driver of the Century and a winner in most anything with four wheels.

When Mario wasn't traveling the world collecting championships, He was known for terrorizing his small Pennsylvania town in one of his Lamborghinis. Mario reportedly has owned a 1989 Anniversary Countach, a 1991 Diablo, a Murcielago, an Aventador, and our 1984 Countach 5000S.

It has been nearly a half century since the Countach was introduced. First shown at the Geneva Auto Show in 1971, there was nothing on the planet like it. The Countach was breathtaking at the time and it still is.

Mario had good taste when he picked our car. It is a 371 hp 5 liter 5000 S model. The early carbureted Countach has a sound and feel that's missing in the later fuel injected versions. The red with tan combination is much more attractive than the Popsicle colors that were in vogue at the time.

Cosmetically the car looks sharp. It sports the original red paint highlighted with a pinstripe incorporating Mario Andretti's logo. The exterior rear view mirrors are also embellished with an Andretti logo. The interior is original, complete, and in top condition.

This car was recently the subject of a major mechanical refurbishment. The engine was pulled and treated to a complete overhaul to new car specs. Any work needed was addressed.

There were only 321 5000 S Countaches built. Only one of those was property of the Driver of the Century. Owning a Countach is a big deal owning Mario's is about as good as it gets.