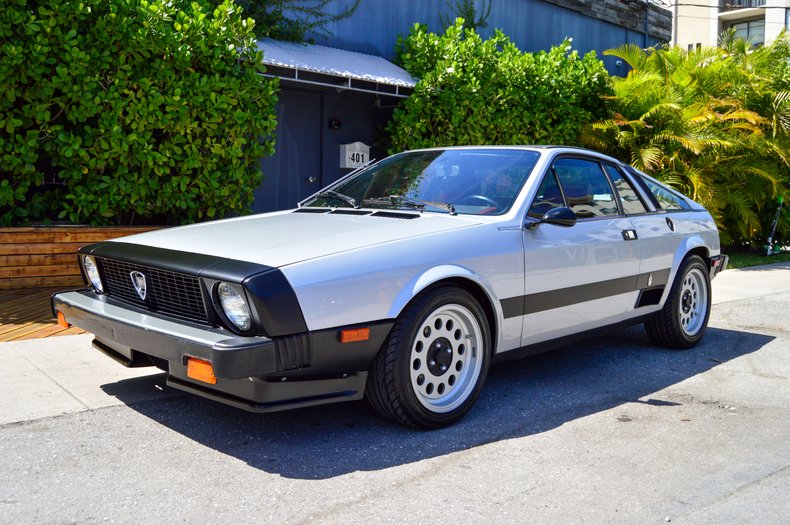 We call this car a Super Scorpion because there's no comparison to a normal version.

The story goes that Car and Driver magazine's staff admired the styling of the Lancia Scorpion but hated the performance. Lancia intended the Scorpion - called Montecarlo in Europe - as a halo car for the marque. Pininfarina was chosen to design and build the car ensuring cover car looks and a premium build quality. Lancia 3-liter V-6 power was chosen to ensure stellar performance.

Unfortunately a worldwide gas crisis killed the V-6 and when the Scorpion made it to the United States it was fit with a miserly 1.8–liter, 81 horsepower, 4-cylinder engine. In a moment of pondering, what if the Scorpion had the power it was built for, Car and Driver devised a plan to turbocharge a Scorpion to see if more power would make the Scorpion as good as it looks.

We've lost our Car and Driver issue that featured the turbocharged Scorpion but the car is alive and well in our showroom. About 10 years ago, a Wisconsin based collector and long-time Pebble Beach judge got the itch for a Scorpion. Spotting an ad in Hemmings for the Car and Driver turbo car, the itch was scratched. A deal was made and the car was relocated to the Northlands from its California home.

The car arrived with its 40 year old paint was starting to craze. A strip to the bare metal found California's climate had been good to the car. No significant bodywork was needed. Fresh paint in the original color returned the appearance to new condition.

The Car and Driver tune was nice but still didn't do the car justice so some upgrades were planned. The owner's mechanic had some magic up his sleeve and over the next six years swapped the Car and Driver setup with a freshly rebuilt 2-liter Lancia Beta motor like Lancia used in the European Scorpion Montecarlos. The 2-liter was topped with an intercooled Garrett turbocharger ran by SAAB 900S turbo management. Fiat 124 turbo, Fiat-Bosch fuel injection system provided the gas. Voilà, Super Scorpion magic was made.

The checkbook was still open and the work continued. Larger Fiat ventilated brakes were then fit, Koni shocks were installed, and a full suspension rebuild performed.

The interior remains original and excellent. The upholstery and carpet are surprisingly nice. The dash is not cracked. All the knobs are there and all the switches work. Even the A/C is cold. A modern stereo replaces the original issue and a Ferrari 308 style Nardi steering wheel highlights the controls. A very large sunroof adds a bonus to nice weather driving.

Off boost the engine is smooth and the car performs like the stock edition, of course, that's not where the fun is. Open the throttle and the car pins your cheeks back from launch to faster than you should be going. Mid-engine handling tames the curves and the bigger brakes add a bit more control.

This car defines cheap thrills. The car has mid-engine Ferrari looks and performance on a smaller scale and lower price. If you like driving, you'll like this car. If you want to wow the crowd and Cars and Coffee, you'll want this car. If you want a smile every time you look in the garage, you need this car.