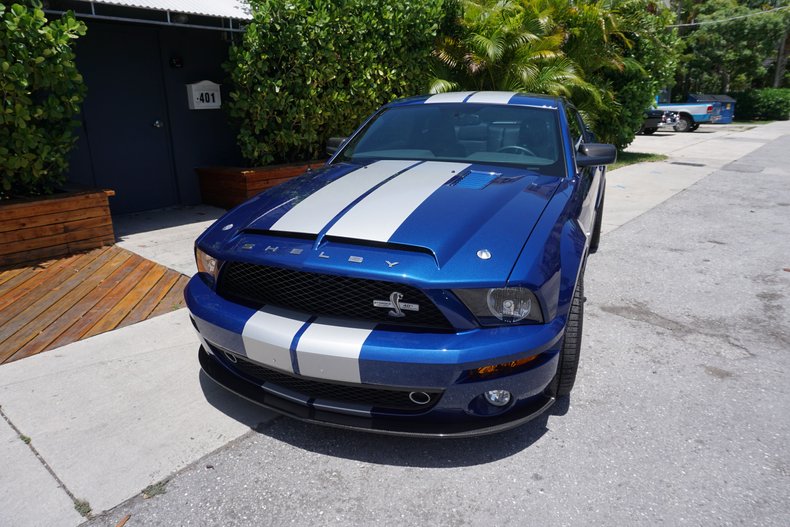 540 horsepower and 510 lb-ft of torque is the headline but there's much more to the story. The 2008-2009 Shelby 500GT KR is a Ford/Shelby colaboration that comermerates Shelby's original 1968 GT500 KR project. KR stands for King of the Road, a title given the Shelby's baddest GT. The original KR is one of the most coveted cars of the muscle car era. The new KR is destin to to have a similiar following.

The new KR is produced in-house at Shelby's factory the same as the first one. Both KRs started with a stock Mustang that Shelby tuned with high horsepower engines, performance tuned suspension and a bevy of Shelby upgrades.

Our GT500KR is one of only 1011, 2008 KRs. They were only built in 4 colors and ours is the most desirable and rarest Vista Blue..Only 100 2008 KR were built in Vista Blue and ours features factory navagation that was only fit to 40 or so cars.

Our GT500 KR has only been driven 5,640 miles which surely makes it about the lowest mileage examples in existence. It has been impeccably maintained without a mark to distinguish it from new. It comes with all its original accessories.

The KRs came with a massive list price. They continue to bring big money due to incredible legacy of Shelby models.

Don't you need some royalty in your garage?