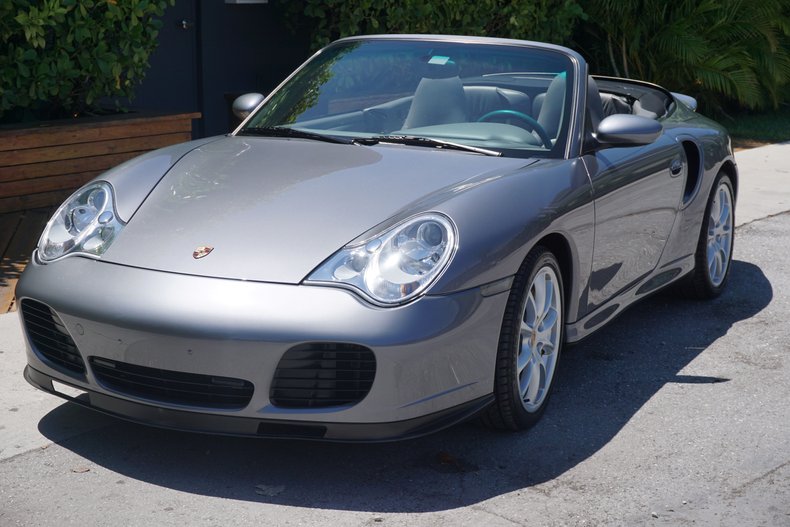 The fifth generation Porsche 911 was code named the 996. It was a major upgrade from the previous 911 and a new direction for the iconic sports car. The new 996 was a 911 in silhouette only. The 996 looked similar to the previous 911 but the suspension and gearbox were about the only parts actually shared with its predecessor.

The big news about the 996 was the new engine. Previous Porsches were powered by air-cooled horizontally opposed engines. The air-cooled engines were beloved by Porsche enthusiasts but Porsche engineers found they could no longer evolve them to modern emission and performance needs. Porsche's response was to retain the traditional horizontally opposed configuration but cool the engine with water.

Our 996 is about the ultimate configuration of a street 911. The turbo S features a twin turbocharged 911 engine with an X50 power kit. The result is a 444 hp beast with all-wheel-drive, carbon-ceramic brakes and a host of performance goodies. Add a cabriolet roof and a 6-speed manual transmission and what else could you want?

The previous owner was Brazilian with a Miami vacation home. He is an avid Porsche collector. He found this car about 3 years ago, stuck it in his collection, and barely drove it 500 miles. It is in unblemished collector condition with perfect paint and interior.
We drive a lot of Porches and found this one particularly enjoyable. It is faster and more refined than a 993 turbo. The low mileage is evident in the condition. It is exceptionally tight and drives like a new car.

The water-cooled 911s were initially shunned by 911 enthusiasts. Lately they are beginning to the recognized for their modern features, great performance, and super value. 996 turbos are less expensive than 993 turbos but are catching up fast. Our car is a collector example, in excellent condition with low mileage. It is one of the best available grab it while you can.