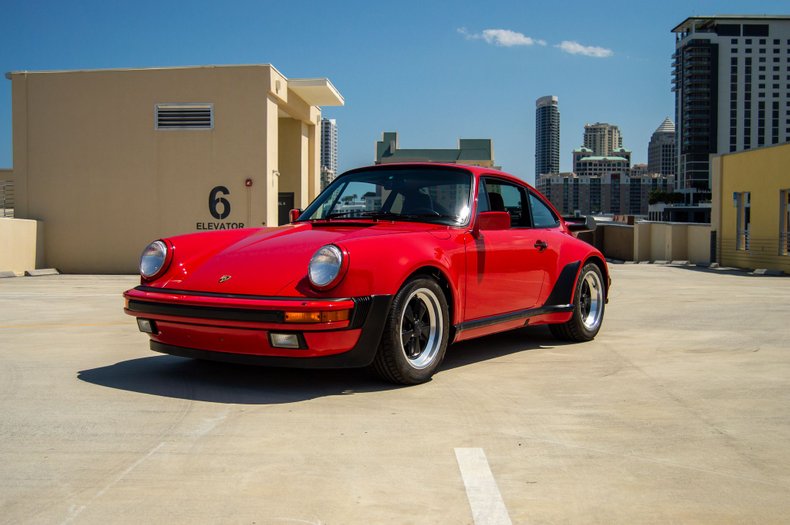 Originally introduced in 1975, the Porsche 930 Turbo was meant to be the homologation car for the 1976 racing season. As with most Porsche products, it quickly gained traction in the marketplace as the fastest German production car on the road at the time. in 1978 the cars underwent some significant changes including new suspension components, increased displacement and intercooler, as well as a new whale tail dubbed the tea tray spoiler to accommodate the intercooler. While power increased, so did weight, making the car handle much differently. From 1980-1985 930 production for the US markets ceased and was reintroduced in 1986 with a new emissions controlled power plant producing 282 hp and 278 ft-lbs of torque. The 930 platform would eventually be replaced in 1989 by the 964 series 911.

This original matching number car has been enjoyed by three private owners with minimal use and is presented in fantastic condition.

The Porsche Certificate of Authenticity verifies this original chassis number 050869 is equipped with original engine number 68H00886. The final assembly was completed 02/07/1987. The COA further states the car being finished in Guards Red over black leather. Original options include an electric sliding sunroof and a limited-slip differential. Standard Turbo equipment included power windows and seats, air-conditioning, tinted glass, and a Blaupunkt Reno radio with cassette player and antenna. The radio has been upgraded to a Porsche classics radio . The original factory Blaupunkt is included with the car.

Currently displaying 16,150 miles, this example recently (11/2020) completed a comprehensive service and inspection by the experts at Orbit Racing in Riviera Beach, Florida . No expense was sparred as every system was checked and now this pristine 930 performs perfectly. Documents show an additional $8,000 was spent on preventative maintenance with a new OEM Sachs clutch kit installed as well as a factory OEM K27 turbo (original comes with car). Both the leak down and compression reports are perfect. The car is accompanied with the Porsche Certificate of Authenticity, comprehensive service records and a current clean CARFAX report.

This particular 930 Turbo is the perfect candidate for the preservation class at Porsche events, regional or national concours d'elegance, Cars & Coffee and Porsche Club of America gatherings. The original paint is nearly flawless as reflected by the paint meter. This highly desirable 930 turbo sits on perfect black 16-inch Fuchs alloy wheels with recently mounted new Michelin Pilot SX performance tires. Also included are both sets of Porsche center caps (painted and black as shown) and original floor mats with Turbo insignia. . This car is a rare acquisition for any enthusiast or collector of air cooled Porsches .

If you are looking for the quintessential '80's German supercar, look no further than this 930 Turbo.